Another post in my series re-visiting educational theory from my PGCE in the context of LD work! But this time, there’s one theory in particular from my teacher training which has stuck with me and which I draw on every single day in my Learning Development work – although I use it in a slightly unexpected way.

Bloom’s Taxonomy of Educational Objectives was admitted by its own author to be one of the most cited but least read texts in education. I’ve read it – well, some of it – well, a bit of it – it’s pretty dense! It boils down to such a nice, concise, self-explanatory graphic  though that very few teachers have felt the need to return to the original book. As with many easily condensed, neatly depicted theories, however, it has at times been oversimplified and applied in far too rigid and literal a way. However, Bloom’s taxonomy has been so influential and impacts so directly on learners that I think it’s a key theory in the Learning Developer’s repertoire.

Bloom’s Taxonomy is a framework for understanding and working with learning objectives. It was developed by a committee led by Bloom in the 1950s to help clarify learning outcomes and ensure that they were suitably complex and challenging for university study. It’s also used to design teaching activities appropriate to those outcomes, and align assessment methods too. Bloom’s taxonomy incorporates three dimensions of learning: the cognitive, affective and psychomotor, but it is the first that is most widely used. The taxonomy organises learning outcomes into six categories, progressing from the least to the most cognitively complex and challenging. Most commonly depicted as a pyramid, the cognitive dimension encompasses, from least to most complex: 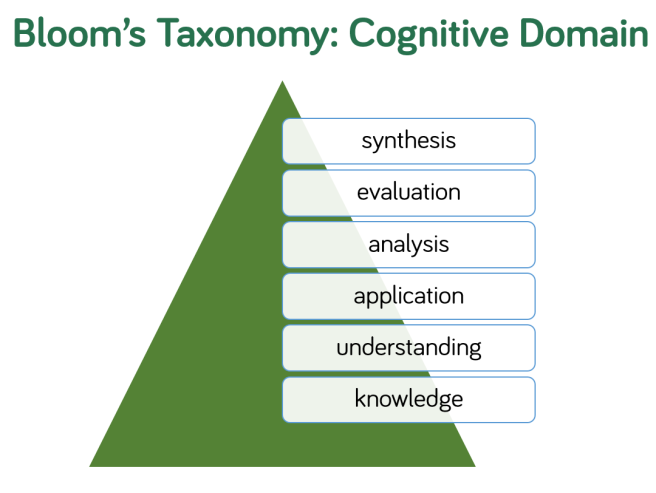 A subsequent review of the taxonomy in 2001 reversed the top two levels, noting that synthesis, or creating new knowledge, should be regarded as more complex than evaluating existing knowledge, which seems fair enough!

Implicitly or explicitly, Bloom underpins so much of the assumptions and language of teaching, learning and assessment. Universities publish marking criteria which not only assume a progressive complexity of objectives, but often also draw on the language of the taxonomy. Feedback is full of this language, and the way assignment questions are phrased alludes to it. However, the Learning Developer encounters three issues relating to Bloom’s taxonomy:

It was Bloom’s taxonomy that made me wonder why we aren’t more open about the ways we’re working with students – they’re adults, and intelligent ones, so why not share with them the models that guide our, and therefore their, practice? It’s rare that I could go through a day and not in some way refer back to Bloom – unpacking the language or unpicking the notion of progressive cognitive complexity it rests on. I use Bloom in a slightly different way to its original purpose, however. I use it as a heuristic, an interpretative framework, with students.

I use it to help students understand the expectations on them at each level of transition (“what does ‘more difficult, advanced, harder’ mean?“), or to help them examine what they understand by ‘learning’ (or “knowing your stuff“), what they value vs what their lecturers prize, or to unpack the way an assignment is phrased and spot the invitations or opportunities to demonstrate higher order thinking (“does ‘discuss’ just mean ‘talk about’, or something more?“). I use it to help interpret feedback and marks with them (“too descriptive means you’re demonstrating a lot of knowledge and understanding – it’s good that you have that knowledge, but what do you do with it?“), and see where they could push themselves more. I use it as an editing tool to highlight the proportion of their writing which is lower or higher order thinking, balancing breadth and depth. “Knowledge and understanding is what you have, from your lectures and reading”, I tell them. “we’re interested also in what you can DO with or to it. Don’t find an answer – make one”.  A simpler version of Bloom which I sometimes use is ICE – Ideas Connections Extensions.

How can we apply it ourselves in the classroom?

Learning developers’ use of Bloom is going to largely be less involved that that of academic colleagues who are planning formal programmes of study, modules, marking criteria and assessments. However, Bloom’s taxonomy is still a useful nudge to us when planning our workshops or also in one-to-one work, to ensure we’re challenging students to an appropriate level and using activities which reflect the complexity of what we’re asking them to learn. Given that emancipatory, student-centred, holistic practice is central to my work, Bloom is a useful reminder to me not just to focus on telling students things and giving them knowledge and understanding. They will need to switch independently between different discourses and codes, so I need to make sure they can analyse academic discourse and practice for themselves and apply the principles they derive. I also need to encourage them to evaluate the strategies we’re discussing and reflect on whether they are right for them individually, and to synthesise these into their own approach. It would be nice to be the fount of all knowledge, telling students all they need to know, but it would do them no favours, even if I knew all the answers, so Bloom is a reminder to me not to take the easy route. It’s also a reminder not to overlook the other two, often neglected, domains – the role of the affective in learning, and the impact of the psychomotor domain even on the cognitive.

Head of Writing Development Service and Learning Developer at Newcastle University. View all posts by RattusScholasticus